This isn’t a list of every article I’ve published, Rather, the “articles” described below are the pieces I’ve written for various websites that are freely accessible. This list includes a summary of each article and a link to where you can find it on the Web. Further below, at the bottom of the page, you can find tags and categories to help you browse and sort.

Summary: The Apostle Paul is in the middle of an extended discussion about spiritual gifts when he breaks stride to explain the importance of love. It isn’t just that love is an amazing force for good; love is permanent. Love does not energize spiritual gifts; love is the point of all the spiritual gifts. That’s a critical thing for preachers to remember, since preachers as much as anyone else have a responsibility to exercise and build their gifts. They also need to devote themselves to love and urge others to love. Nothing else matters. This is a vital message, too, for people doing ministry during a pandemic in a divided and frustrated society, when loving others is much more difficult than it sounds. Fortunately love never falters.

I wrote this article for those preparing to preach or hear sermons on 1 Corinthians 13:1-13. It was originally a contribution to the “Dear Working Preacher” series. Read the full article at Working Preacher.

Summary: The conclusion of the church year, Reign of Christ (or Christ the King) Sunday presents preachers with an opportunity to reflect on the future, especially to examine what assumptions about the future influence their own theologies and sermons. The scene in John’s Gospel when Pontius Pilate interrogates Jesus manifests the failure of Pilate’s imagination. He cannot understand Jesus’ identity as a king in a manner other than what he is used to; it must be about power and domination. Pilate’s categories are inflexible. This resembles too much Christian preaching and teaching about the future and about the nature of the gospel. A kingdom or reign that is “not from this world” is one that is unfamiliar to this world and our norms. One piece of a preacher’s job description is to break open our closed minds so that we might imagine and live into a future that is indeed different.

I wrote this article for those preparing to preach or hear sermons on John 18:33-37. It was originally a contribution to the “Dear Working Preacher” series. Read the full article at Working Preacher.

Summary: It’s a difficult passage to read and to preach, this story of a rich man’s’ encounter with Jesus. Consistent with much of Mark’s portrait of discipleship, it speaks about extraordinary self-giving. At the same time, it is an unusual text, with Jesus making discipleship look close to impossible. To preach a passage like this, a preacher does well to consider their role and the sermon’s goals. As for the role, a preacher should approach this text as a co-traveler alongside the congregation. As for the sermon’s goals, it’s best to find creative ways to translate the passage’s discussion of radical solidarity with the poor into contemporary terms. That is not to diminish the passage’s demands; it is to help us think about how much we need each other to walk the road of discipleship together.

I wrote this article for those preparing to preach or hear sermons on Mark 10:17-31. It was originally a contribution to the “Dear Working Preacher” series. Read the full article at Working Preacher.

Summary: Jesus describes himself as the good shepherd, not because he is kind or gentle, but because he is powerful, vigilant, and self-giving. That comforting metaphor works because Jesus has ascended or, as John’s Gospel puts it, he has returned to the loving and intimate communion he shares with the God he calls his Father. His watchful care is a feature of his power. The care he provides does not mean we are kept safe from all harm in this dangerous world. Rather, it means that we can be confident that he holds our identity, our connection to him, and our participation in Divine love securely. The watchfulness and concern he provides comes as a sharp contrast to the ways our leaders, structures, and societies frequently let us down and treat people as expendable.

I wrote this article for those preparing to preach or hear sermons on John 10:11-18. It was originally a contribution to the “Dear Working Preacher” series. Read the full article at Working Preacher. 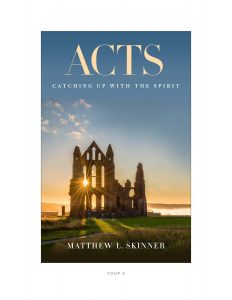